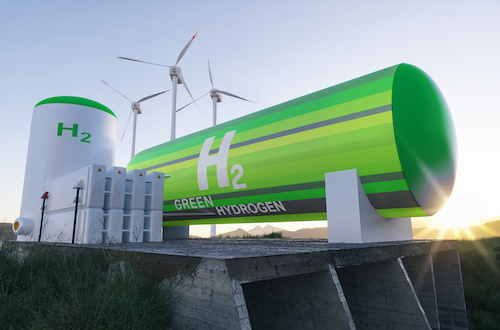 Climate change continues to be a major challenge for governments, businesses and the general public. In order to reduce the carbon footprint and achieve net-zero carbon emissions, it’s imperative to develop clean forms of energy as an alternate to fossil fuels.

However, this challenge is threatened by financial considerations as the world faces the threat of inflation pressures, including interest rate rises, and energy supply and pricing are threatened by geo-political forces, especially in Europe.

So far, most governments have focused their resources on solar and wind – two forms of renewable energy that are, by nature, intermittent. While the development of these energy sources signals a big step in the right direction, they alone will be unable to meet net-zero targets and continue to be challenged by storage issues.

One form of clean energy that could prove to have a similar impact to solar and wind is green hydrogen. Investment into this renewable resource is on the increase, and creating the financial platform on which green hydrogen could fulfil its potential and lead the charge toward carbon neutrality.

What is green hydrogen?

Hydrogen is an important energy carrier used to store and transport energy. Currently, over 95% of hydrogen production is fossil-fuel based. The remaining minority, derived from low-carbon or carbon-free renewable energy sources, can be considered ‘green hydrogen’.

Water electrolysis is the key process that underpins green hydrogen production. This technique uses a carbon-free electric current, powered by renewable energy sources such as solar, wind and hydro, to split water (H₂O) into hydrogen (H₂) and oxygen (O).

While green H2 has been discussed as a potential source of renewable energy for some time, only recently has it finally found use in industry. The future for green hydrogen is bright, with the energy source expected to account for up to 12% of global energy usage by 2050.

How can green hydrogen help in the fight against climate change?

Much of the excitement about green hydrogen stems from its potential to bring several “harder-to-abate" sectors – those that are most difficult to decarbonise – closer to net-zero emissions. Chief among these sectors are energy, steelmaking, chemicals and transport.

Green hydrogen can help cut emissions in the energy sector

The energy sector is the biggest contributor of any industry to climate change, responsible for around 40% of global carbon emissions. Hydrogen is used in the energy sector as an energy carrier in fuel cells, facilitating the storage and transportation of energy across the supply chain.

Currently, most energy carriers are derived from fossil fuels such as oil and natural gas. Renewable energy sources such as solar and wind continue to be frustrated by lack of efficient storage facilities.

Green hydrogen, as a low-carbon alternative, has the potential to sustainably store and supply energy in the steps between production and end-use consumption. Green energy generated using renewable sources is an efficient way to create and store low carbon energy.

Many of the most influential manufacturing industries are reliant on the use of fossil fuels such as coal and natural gas as part of the production process. One such industry is steelmaking, which was responsible for 8% of all global greenhouse gas emissions in 2018.

The goal with the steel industry is to replace the oil, coal and natural gas used to heat and reduce iron oxide with green H2. Industry leaders have already begun investing in new on-site electrolysis plants and green steel plants that could almost entirely decarbonise the steel production process.

Hydrogen is already used widely in the chemicals industry. It’s a fundamental building block in the production of molecules like ammonia and methanol which, in turn, are used to make chemical products such as fertilisers and pharmaceuticals.

Currently, the chemical industry is heavily reliant on the use of grey hydrogen (hydrogen derived from fossil fuels). It’s expected that these high-carbon forms of hydrogen will be phased out from the chemical manufacturing process once green hydrogen production begins on a mass scale.

One sector in which green hydrogen has already broken ground is transport, with several established car manufacturers now mass-producing fuel cell electric vehicles (FCEVs) for the market. Rather than run off petroleum or even a rechargeable battery, these vehicles use a hydrogen-powered fuel cell.

The aim is to develop this technology so that hydrogen fuel cells can be used not only in cars but also in planes, trains, lorries, buses and even ships. Green hydrogen can also be used to create green ammonia, a next-generation clean combustion fuel for power plants and the shipping industry.

With the energy transition gaining momentum, green H2 looks set to play a big part in decarbonising some of the planet’s most heavily polluting industries. The opportunities presented by this renewable resource are vast, with the number of green hydrogen jobs worldwide likely to surpass 5 million by 2050.

Petroplan has a rich history in delivering renewable energy projects and stands ready to support both clients and candidates as investment in green hydrogen increases. Get in touch today to find out how you can benefit from the industry’s best talent and workforce solutions.